Get Interesting Photos Direct To Your Email
Sign up for our newsletter and receive unique photos for your viewing pleasure!
We hate SPAM and we promise to keep your email address safe.
No thanks, I have already subscribed!
Thank You
Follow Us Follow @allrefer Pinterest
AllRefer.com > Pictures & Images > Thunderbirds - Show Line 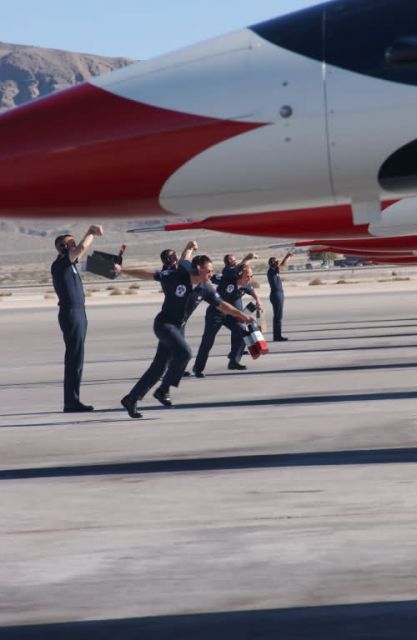 NELLIS AIR FORCE BASE, Nev.—The 2005 Thunderbird Show Line bursts into action while recovering six jets moments after the Delta formation was formed for the first time by the 2005 demonstration team. The Delta formation is the most prestigious milestone the demonstration pilots reach during the training season. The United States Air Force Aerial Demonstration Squadron “Thunderbirds,” who start their show season in March, are scheduled to perform at 45 different show sites in the U.S., Canada and Central America. (U.S. Air Force Photo by Master Sgt. George F. Jozens)