Get Interesting Photos Direct To Your Email
Sign up for our newsletter and receive unique photos for your viewing pleasure!
We hate SPAM and we promise to keep your email address safe.
No thanks, I have already subscribed!
Thank You
Follow Us Follow @allrefer Pinterest
AllRefer.com > Pictures & Images > KC-135 - Fueling the Spirit 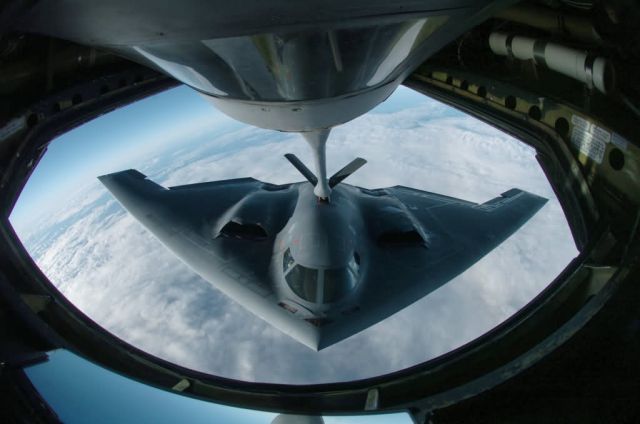 OVER THE PACIFIC OCEAN—A B-2 Spirit bomber refuels from a KC-135 Stratotanker here during a deployment to Andersen Air Force Base, Guam. The bomber deployed as part of a rotation that has provided U.S. Pacific Command officials a continuous bomber presence in the Asia-Pacific region, enhancing regional security and the U.S. commitment to the Western Pacific. The Spirit is from the 509th Bomb Wing at Whiteman AFB, Mo. The Stratotanker is assigned to the Illinois Air National Guard’s 126th Air Refueling Wing at Scott AFB. (U.S. Air Force photo by Master Sgt. Val Gempis)