Get Interesting Photos Direct To Your Email
Sign up for our newsletter and receive unique photos for your viewing pleasure!
We hate SPAM and we promise to keep your email address safe.
No thanks, I have already subscribed!
Thank You
Follow Us Follow @allrefer Pinterest
AllRefer.com > Pictures & Images > Stocking razorback sucker fry at Ouray NFH, Colorado 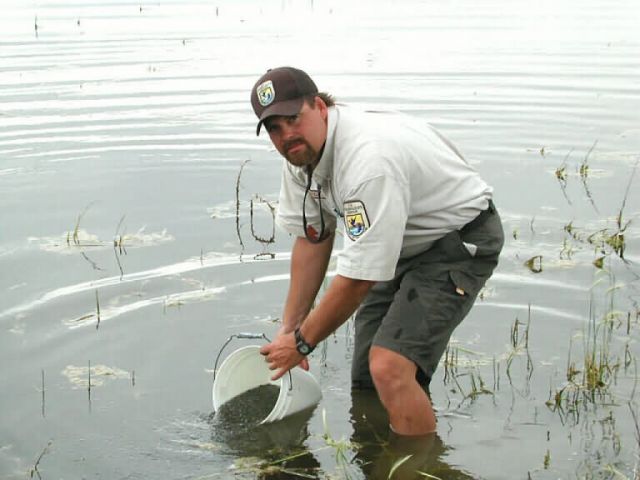 FWS Biologist Mark Fuller of the Vernal Colorado River Fishery Project stocks endangered razorback sucker fry into nursery areas of the Green River in Ouray National Wildlife Refuge. The fisheries works with endemic fish species of the Upper Colorado system including the endangered Colorado pikeminnow, bonytail, humpback chub, and razorback sucker. The Ouray NWR was established in 1960 as a sancturay for migratory birds including waterfowls. Located 30 miles south of Vernal, Utah, the Refuge covers 11,987 acres and includes 16 miles of Green River. The desert of northeastern Utah is a harsh place for wildlife and the Refuge is one link in the chain of sparsley distributed wetlands along the Green River corridor that provide much needed habitat for all wildlife. Water is a scarce resources in the desert, and as flooding occurs, ponds are formed spurring the growth of aquatic plants and invertebrates which provides cover and food for many ducks and other wildlife. In addition to