Get Interesting Photos Direct To Your Email
Sign up for our newsletter and receive unique photos for your viewing pleasure!
We hate SPAM and we promise to keep your email address safe.
No thanks, I have already subscribed!
Thank You
Follow Us Follow @allrefer Pinterest
AllRefer.com > Pictures & Images > Releasing Endangered Masked Bobwhite Quail 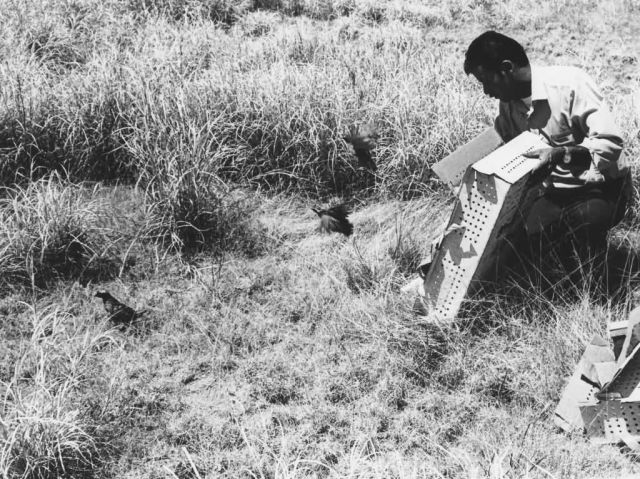 By the 1970’s, an added responsibility emerged for AmericaÃ¢â¬â ¢s National Wildlife Refuge System Ã¢â¬â promoting the recovery of Federally-listed endangered and threatened species, some of which found their last sanctuary on undeveloped tracts of public and private land where suitable habitat remained to support recovery projects. In 1985, the U.S. Fish and Wildlife Service purchased southern ArizonaÃ¢â¬â ¢s Buenos Aires Ranch as the springboard for the recovery of the masked bobwhite quail, an endangered bird once abundant in the region but more recently victim of overgrazing and not-so-subtle changes in grassland vegetation. Over 320 species of birds have been recorded at the refuge, making it a mecca for birdwatchers. A refuge employee releases masked bobwhite quail in the region, date and location unknown.