Get Interesting Photos Direct To Your Email
Sign up for our newsletter and receive unique photos for your viewing pleasure!
We hate SPAM and we promise to keep your email address safe.
No thanks, I have already subscribed!
Thank You
Follow Us Follow @allrefer Pinterest
AllRefer.com > Pictures & Images > Old Tjikko 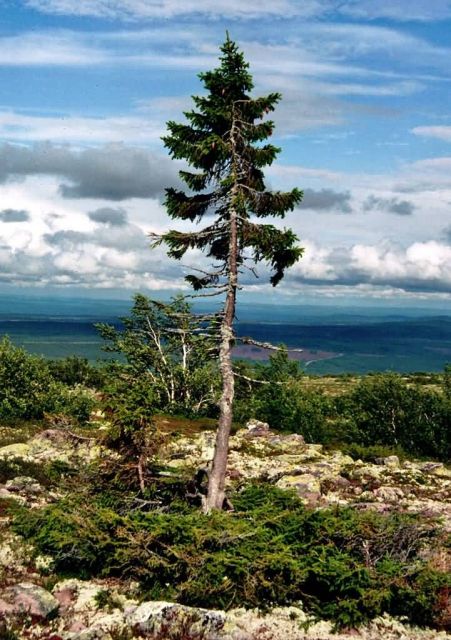 Old Tjikko is estimated to be at least 9,550 years old, making it the world’s oldest known individual vegetatively cloned tree. It stands 5 metres (16 ft) tall and is located on Fulufjallet Mountain of Dalarna province in Sweden. The age of the tree was determined by carbon dating of genetically matched plant material collected from under the tree, not by dendrochronology or counting tree rings.

The trunk itself is estimated to be only a few hundred years old, but the plant has survived for much longer due to a process known as layering (when a branch comes in contact with the ground, it sprouts a new root) or vegetative cloning (when the trunk dies but the root system is still alive, it may sprout a new trunk). The man who discovered the tree, Leif Kullman has attributed this growth spurt to global warming and given the tree its nickname “Old Tjikko” after his late dog.