Get Interesting Photos Direct To Your Email
Sign up for our newsletter and receive unique photos for your viewing pleasure!
We hate SPAM and we promise to keep your email address safe.
No thanks, I have already subscribed!
Thank You
Follow Us Follow @allrefer Pinterest
AllRefer.com > Pictures & Images > HH-60G - Helicopter mission changes as rescue tempo slows 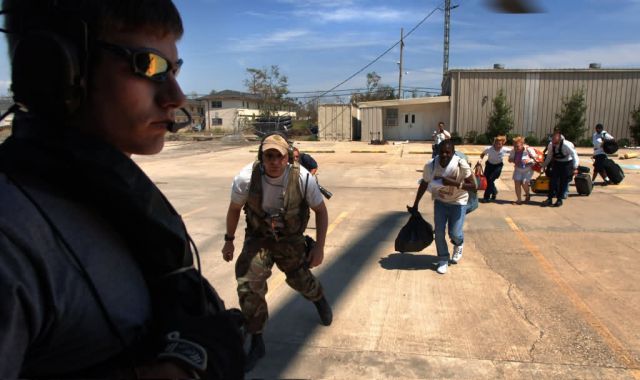 NEW ORLEANS—An Air Force pararescueman helps load evacuees aboard an HH-60G Pave Hawk helicopter from the 38th Rescue Squadron at Moody Air Force Base, Ga. The unit is part of the deployed 347th Expeditionary Airlift Group in Jackson, Miss. The helicopter took the evacuees to the New Orleans airport from where they will go to a relocation center somewhere in the United States. Helicopter aircrews have been rescuing people since the day after Hurricane Katrina hit the Gulf Coast. (U.S. Air Force photo by Master Sgt. Efrain Gonzalez)