Get Interesting Photos Direct To Your Email
Sign up for our newsletter and receive unique photos for your viewing pleasure!
We hate SPAM and we promise to keep your email address safe.
No thanks, I have already subscribed!
Thank You
Follow Us Follow @allrefer Pinterest
AllRefer.com > Pictures & Images > F-16 - Air Force receives last F-16 Falcon 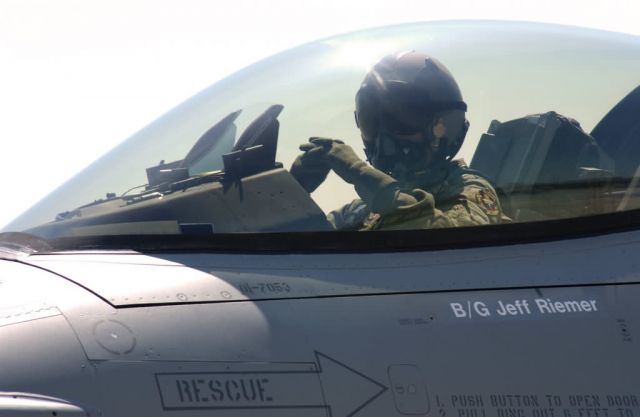 SHAW AIR FORCE BASE, S.C.—Brig. Gen. Jeff Riemer delivers the last new Air Force F-16 Fighting Falcon here March 18. General Riemer, who was the System Program Office director when the contract for F-16s was awarded, flew the Falcon from the Lockheed Martin plant in Forth Worth. While Lockheed will continue to produce F-16s for international coalition partners, this aircraft is the last of 2,231 F-16s produced for the Air Force. The first delivery was in 1978. General Riemer is now the director of operations at the Air Force Materiel Command headquarters here. (U.S. Air Force photo by Staff Sgt. Josef E. Cole III)