Get Interesting Photos Direct To Your Email
Sign up for our newsletter and receive unique photos for your viewing pleasure!
We hate SPAM and we promise to keep your email address safe.
No thanks, I have already subscribed!
Thank You
Follow Us Follow @allrefer Pinterest
AllRefer.com > Pictures & Images > F-15E Strike Eagle - Pods 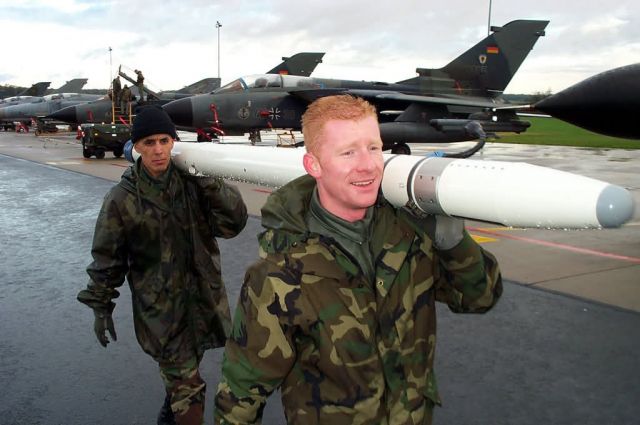 ROYAL AIR FORCE STATION LAKENHEATH, England—Staff Sgt. Antonio Luna and Airman 1st Class Tom Litteer, both from 492nd Fighter Squadron here, carry an F-15E Strike Eagle ACM pod back to the maintenance hangar. The pod is used for flight training data. In the aftermath of the Sept. 11 terrorist attacks on the United States, NATO invoked Article 5, declaring an attack on one member nation an attack on all 19 in the alliance. The declaration opened the door for a military response from NATO, which has already dispatched airborne warning and control aircraft to patrol U.S. skies. (U.S. Air Force photo by Staff Sgt. Dean J. Miller)