Get Interesting Photos Direct To Your Email
Sign up for our newsletter and receive unique photos for your viewing pleasure!
We hate SPAM and we promise to keep your email address safe.
No thanks, I have already subscribed!
Thank You
Follow Us Follow @allrefer Pinterest
AllRefer.com > Pictures & Images > B-52H Stratofortress - Load crew 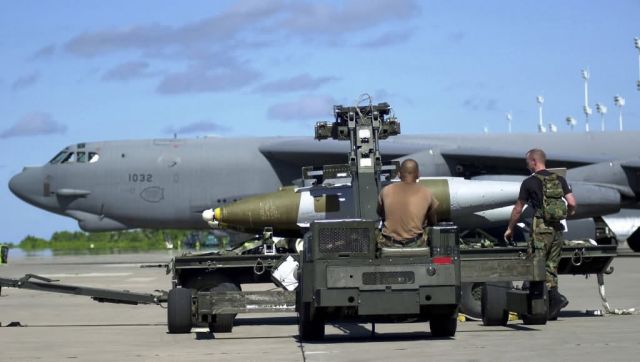 OPERATION ENDURING FREEDOM—Air Force munitions specialists from the 28th Air Expeditionary Wing download Joint Direct Attack Munitions from a B-52H Stratofortress at an operating location in support of Operation Enduring Freedom on Nov. 28. Coalition forces used about 110 strike aircraft against Taliban and al Qaeda forces Dec. 2. About 90 of those were tactical jet aircraft from sea-based platforms, about 12 to 14 were land-based tactical jets, and between eight and 10 were long-range bombers. (U.S. Air Force photo by Staff Sgt. Shane Cuomo)