Get Interesting Photos Direct To Your Email
Sign up for our newsletter and receive unique photos for your viewing pleasure!
We hate SPAM and we promise to keep your email address safe.
No thanks, I have already subscribed!
Thank You
Follow Us Follow @allrefer Pinterest
AllRefer.com > Pictures & Images > B-52 - Runway stars 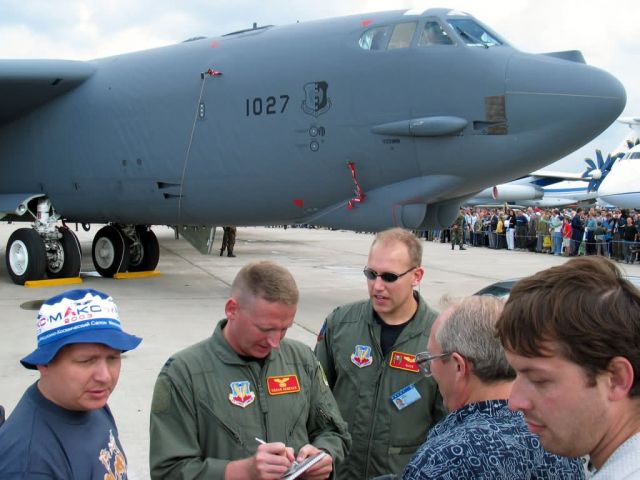 ZHUKOVSKY AIRFIELD, Russia—Capts. Kieran Denehan (left) and Gary Berger sign autographs at the Moscow Aviation and Space Show on Aug. 22. They are B-52 Stratofortress crew members from Minot Air Force Base, N.D. This is the first time U.S. military aircraft have been on public display in Russia. Four other U.S. military aircraft are on display here: an F-16 Fighting Falcon, an F-15E Strike Eagle, a C-130 Hercules and a KC-135 Stratotanker. Also, an F-15 Eagle performs a daily aerial demonstration. The show ends Aug. 24. (U.S. Air Force photo by Master Sgt. Kenneth Fidler)