Get Interesting Photos Direct To Your Email
Sign up for our newsletter and receive unique photos for your viewing pleasure!
We hate SPAM and we promise to keep your email address safe.
No thanks, I have already subscribed!
Thank You
Follow Us Follow @allrefer Pinterest
AllRefer.com > Pictures & Images > B-52 - B-52 in flight 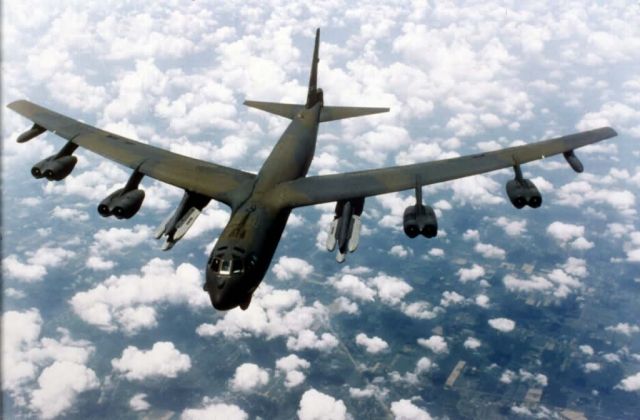 FILE PHOTO—Air Combat Command’s B-52 is a long-range, heavy bomber that can perform a variety of missions. The bomber is capable of flying at high subsonic speeds at altitudes up to 50,000 feet. It can carry nuclear or conventional ordnance with worldwide precision navigation capability. In a conventional conflict, the B-52 can perform air interdiction, offensive counter-air and maritime operations. During Desert Storm, B-52s delivered 40 percent of all the weapons dropped by coalition forces. It is highly effective when used for ocean surveillance, and can assist the U.S. Navy in anti-ship and mine-laying operations. Two B-52s, in two hours, can monitor 140,000 square miles of ocean surface. (U.S. Air Force photo)