Get Interesting Photos Direct To Your Email
Sign up for our newsletter and receive unique photos for your viewing pleasure!
We hate SPAM and we promise to keep your email address safe.
No thanks, I have already subscribed!
Thank You
Follow Us Follow @allrefer Pinterest
AllRefer.com > Pictures & Images > B-52 - a long-range, heavy bomber - Buff landing 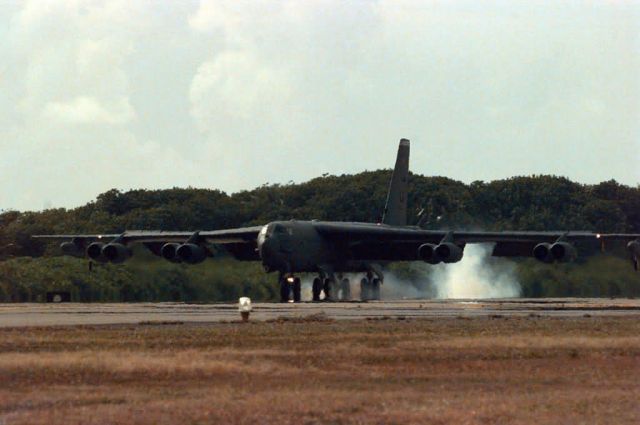 OPERATION SOUTHERN WATCH—A B-52 from the 96th Bomber Squadron, Barksdale Air Force Base, La., arrives at Diego Garcia as part of the Second Air Expeditionary Group. Air Combat Command’s B-52 is a long-range, heavy bomber that can perform a variety of missions. The bomber is capable of flying at high subsonic speeds at altitudes up to 50,000 feet. It can carry nuclear or conventional ordnance with worldwide precision navigation capability. (U.S. Air Force photo by Senior Airman Diane Robinson)