Get Interesting Photos Direct To Your Email
Sign up for our newsletter and receive unique photos for your viewing pleasure!
We hate SPAM and we promise to keep your email address safe.
No thanks, I have already subscribed!
Thank You
Follow Us Follow @allrefer Pinterest
AllRefer.com > Pictures & Images > B-2 - Bomber trio 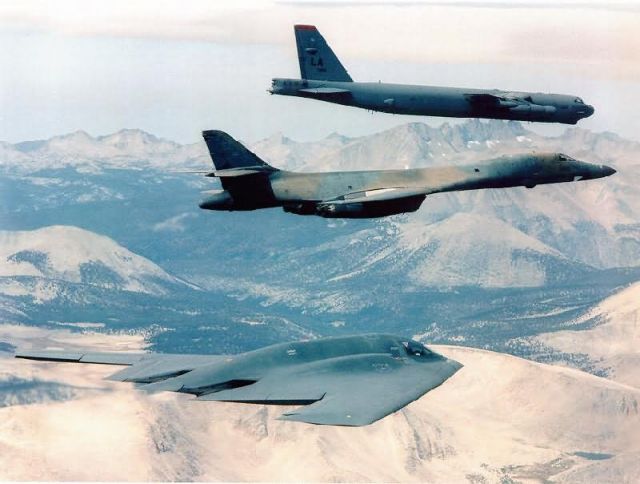 FILE PHOTO—The Air Force bomber force in flight together. The B-2 Spirit is a multi-role bomber capable of delivering both conventional and nuclear munitions. The B-1B is a multi-role, long-range bomber, capable of flying intercontinental missions without refueling, then penetrating present and predicted sophisticated enemy defenses. It can perform a variety of missions, including that of a conventional weapons carrier for theater operations. Air Combat Command’s B-52 is a long-range, heavy bomber that can perform a variety of missions. The bomber is capable of flying at high subsonic speeds at altitudes up to 50,000 feet. It can carry nuclear or conventional ordnance with worldwide precision navigation capability. (U.S. Air Force photo)