Get Interesting Photos Direct To Your Email
Sign up for our newsletter and receive unique photos for your viewing pleasure!
We hate SPAM and we promise to keep your email address safe.
No thanks, I have already subscribed!
Thank You
Follow Us Follow @allrefer Pinterest
AllRefer.com > Pictures & Images > SR-71A Strategic Reconnaissance Aircraft - Blackbird 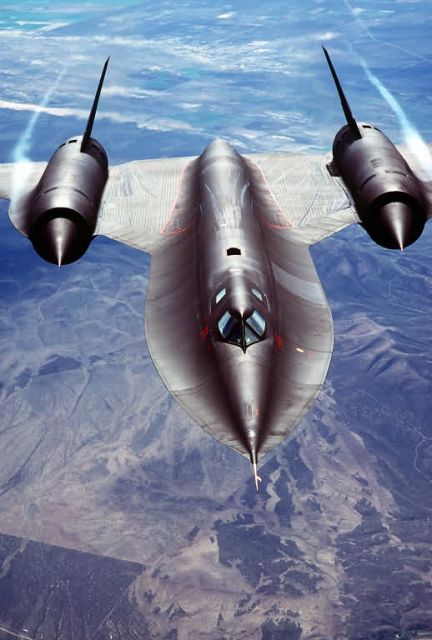 BEALE AIR FORCE BASE, Calif.—An air-to-air overhead front view of an SR-71A strategic reconnaissance aircraft. The SR-71, unofficially known as the "Blackbird," is a long-range, advanced, strategic reconnaissance aircraft developed from the Lockheed A-12 and YF-12A aircraft. The U.S. Air Force retired its fleet of SR-71s on Jan. 26, 1990, but returned them in 1995 until January 1997. Throughout its nearly 24-year career, the SR-71 remained the world’s fastest and highest-flying operational aircraft. (U.S. Air Force photo by Tech. Sgt. Michael Haggerty)