Get Interesting Photos Direct To Your Email
Sign up for our newsletter and receive unique photos for your viewing pleasure!
We hate SPAM and we promise to keep your email address safe.
No thanks, I have already subscribed!
Thank You
Follow Us Follow @allrefer Pinterest
AllRefer.com > Pictures & Images > Neotropical Cormorants and Caracara 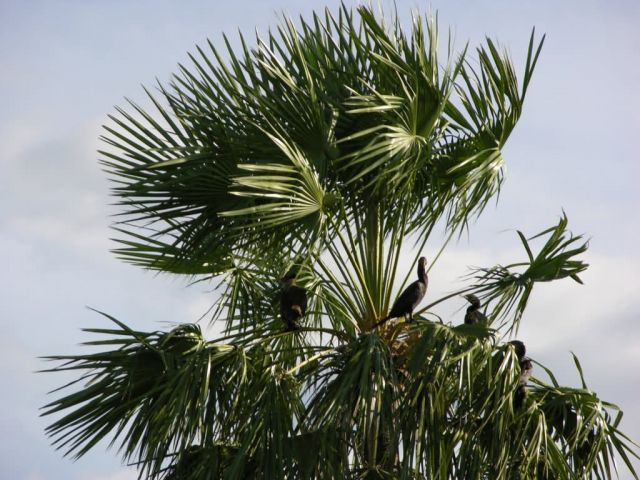 Three cormorants and one caracara in palm along Rio Negro River in Pantanal (Caracara is bird on left, in shadows). End of wet season. Paraguay is home to at least 589 breeding bird species and 120 migratory bird species. This region, situated in the extreme northeastern corner of western Paraguay and extending south along the Paraguay river forms a southern extension to the primarily Brazilian Pantanal. It is typified by medium-height subhumid forests, wetlands and periodically flooded forests. A total of 377 bird species have been recorded in the Matogrosense region, of which four have not been found elsewhere in Paraguay. Near 19Â°55âS, 58Â°35âW. Breeding Status: Breeding permanent resident. Habitat: Freshwater. Estado de ocurrencia: Residente nidificante permanente. HÃ¡bitat: Agua Dulce. (Portion of text from: Guyra Paraguay 2004, Annotated Checklist of the Birds of Paraguay, Paraguay.)