Get Interesting Photos Direct To Your Email
Sign up for our newsletter and receive unique photos for your viewing pleasure!
We hate SPAM and we promise to keep your email address safe.
No thanks, I have already subscribed!
Thank You
Follow Us Follow @allrefer Pinterest
AllRefer.com > Pictures & Images > KC-135 Stratotanker - Refueling with a Fench flair 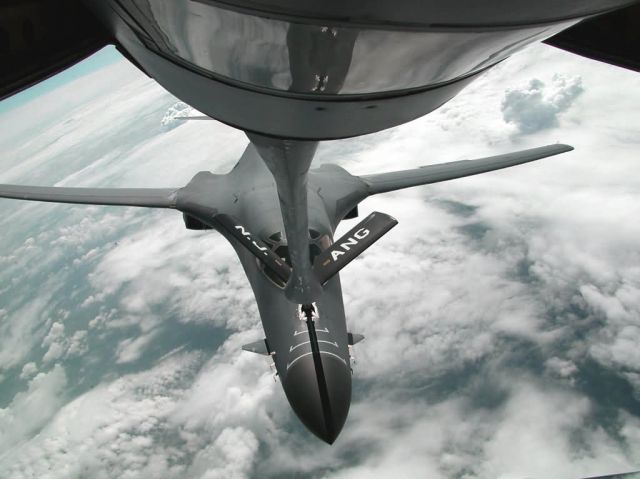 ISTRES, France—A B-1B Lancer bomber is refueled over France by a KC-135 Stratotanker from the 108th Air Refueling Wing, McGuire Air Force Base, N.J., New Jersey Air National Guard. The B-1 is assigned to the Kansas Air National Guard’s 184th Bomb Wing, McConnell Air Force Base, Kan. The B-1 filled its tanks for the flight home from Istres, where it was on display at the French Air Base 25’s Istres Air Show May 20. The KC-135 is temporarily assigned to the 16th Expeditionary Operations Group, a small U.S. Air Force detachment located on the French base. (U.S. Air Force photo by Master Sgt. Kenneth Fidler)