Get Interesting Photos Direct To Your Email
Sign up for our newsletter and receive unique photos for your viewing pleasure!
We hate SPAM and we promise to keep your email address safe.
No thanks, I have already subscribed!
Thank You
Follow Us Follow @allrefer Pinterest
AllRefer.com > Pictures & Images > Grizzly Bear in Yellowstone National Park 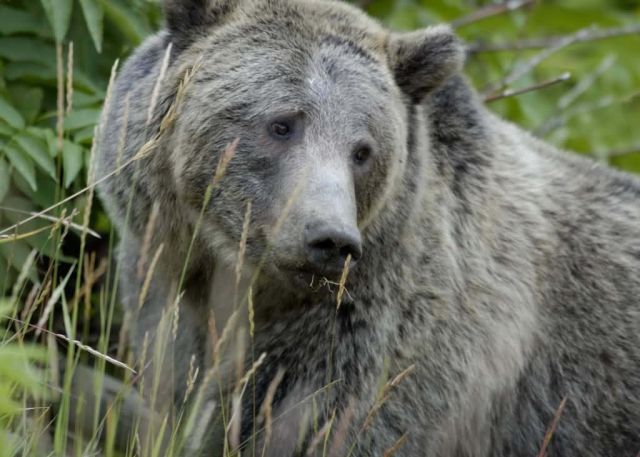 Reaching weights of about 400- 1500 lbs, the grizzly bear is mainly nocturnal and in preparation for winter will put on hundreds of pound of fat before going into hibernation. Their coloring ranges from blond to deep brown or black. The grizzly has a large hump over the shoulders which is a muscle mass used to power the forelimbs in digging. The head is large and round with a concave facial profile. In spite of their massive size this bear runs at speeds of up to 35 mph. Being omnivores, they feed on a variety of plants and berries including roots or sprouts and fungi as well as fish, insects and small mammals. Normally a solitary animal, the grizzly congregates alongside streams and rivers during the salmon spawn. Every other year females produce 1-4 young which are small and weigh only about 1 pound. For more information about the listed status of the grizzly please visit http://ecos.fws.gov/species_profile/servlet/gov.doi.species_profile.servlets.SpeciesProfile?spcode=A001