Get Interesting Photos Direct To Your Email
Sign up for our newsletter and receive unique photos for your viewing pleasure!
We hate SPAM and we promise to keep your email address safe.
No thanks, I have already subscribed!
Thank You
Follow Us Follow @allrefer Pinterest
AllRefer.com > Pictures & Images > FWS Workers with Wood Stork Chick 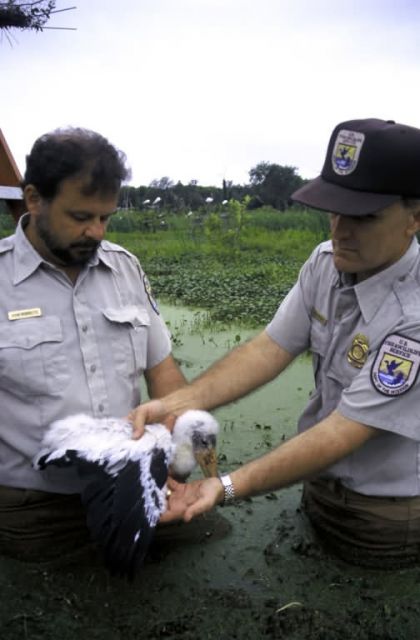 Two FWS biologists tagging a wood stork. Wood storks are widespread in Central and South America, but declined to alarmingly low numbers in the United States. At the turn of the century, there were over 150,000 wood storks living in Florida, while today there are only 7,000 to 10,000 storks in all of the United States. Most of the decline was caused by habitat loss and modification. Scientists hope to better understand the biology of wood storks so that the current population can be protected by wise wildlife management.