Get Interesting Photos Direct To Your Email
Sign up for our newsletter and receive unique photos for your viewing pleasure!
We hate SPAM and we promise to keep your email address safe.
No thanks, I have already subscribed!
Thank You
Follow Us Follow @allrefer Pinterest
AllRefer.com > Pictures & Images > FWS Employee with Gopher Tortoise 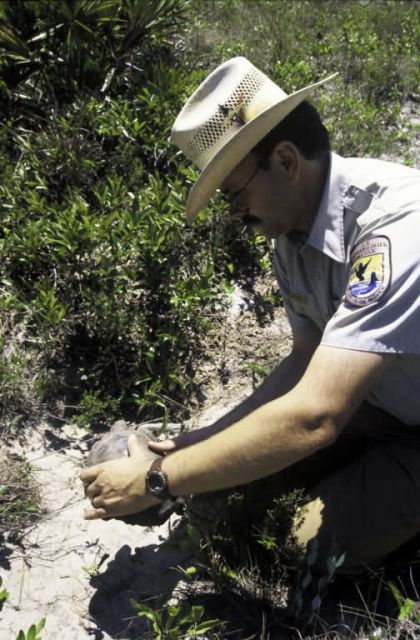 The Gopher Tortoise is one of four tortoises that live in North America. It has been estimated that the Florida population will be reduced nearly 70% by 2000 A.D. and could be eliminated from all but protected lands by 2025 A.D. A combination of habitat destruction, predation by humans and other animals, and biological characteristics of the tortoise have placed its existence in jeopardy over most of its range. The estimated life span of the Gopher Tortoise ranges between 40-60 years to as long as 150 years. Females lay an average of 6 eggs in an open sandy spot. Most eggs laid never hatch because of mammalian predators such as Raccoons, Opossums, Foxes, and Armadillos. It is estimated that of every 100 eggs laid, only 1-3 survives to become a reproductive adult . All of these biological characteristics result in a low reproductive rate that makes the Gopher Tortoise susceptible to development or disturbance.