Get Interesting Photos Direct To Your Email
Sign up for our newsletter and receive unique photos for your viewing pleasure!
We hate SPAM and we promise to keep your email address safe.
No thanks, I have already subscribed!
Thank You
Follow Us Follow @allrefer Pinterest
AllRefer.com > Pictures & Images > F/A-22 - Wet-runway testing 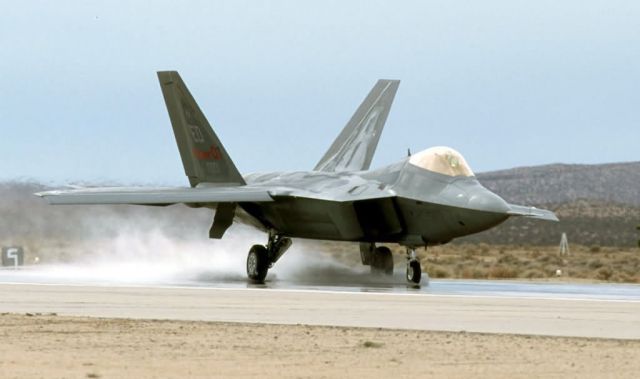 EDWARDS AIR FORCE BASE, Calif.—Raptor 4001 undergoes wet-runway testing during a rare rainy day here in the Mojave Desert. The F/A-22 was tested at speeds of 30, 60 and 90 knots. This test is just one of thousands that the F/A-22 Combined Test Force is putting the Raptor through during the most extensive test program that any fighter aircraft has undergone. (U.S. Air Force photo by Derk Blanset)