Get Interesting Photos Direct To Your Email
Sign up for our newsletter and receive unique photos for your viewing pleasure!
We hate SPAM and we promise to keep your email address safe.
No thanks, I have already subscribed!
Thank You
Follow Us Follow @allrefer Pinterest
AllRefer.com > Pictures & Images > F/A-22 Raptor - It's a 'Rap' 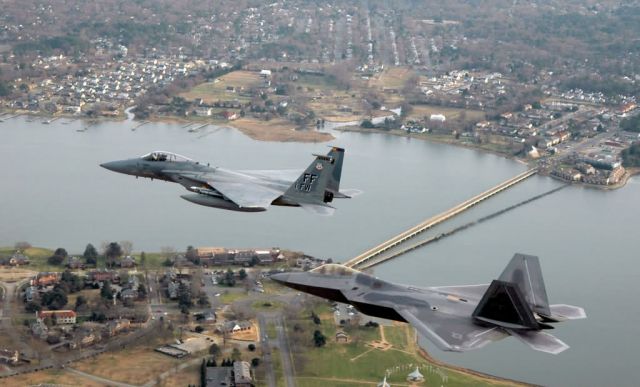 LANGLEY AIR FORCE BASE, Va.—An F/A-22 Raptor (foreground) and an F-15 Eagle fly over Langley Air Force Base, Va., Jan. 7. It was the Raptor’s final flight before landing at its new home here. The F/A-22 will be used as a training tool to keep 1st Fighter Wing maintainers proficient on the Raptor. The wing’s 27th Fighter Squadron pilots will begin flying operational missions later this month when the second Raptor arrives. (Air Force photo by Senior Master Sgt. Keith Reed)