Get Interesting Photos Direct To Your Email
Sign up for our newsletter and receive unique photos for your viewing pleasure!
We hate SPAM and we promise to keep your email address safe.
No thanks, I have already subscribed!
Thank You
Follow Us Follow @allrefer Pinterest
AllRefer.com > Pictures & Images > F/A-22 Raptor - F/A-22 Raptor 4002 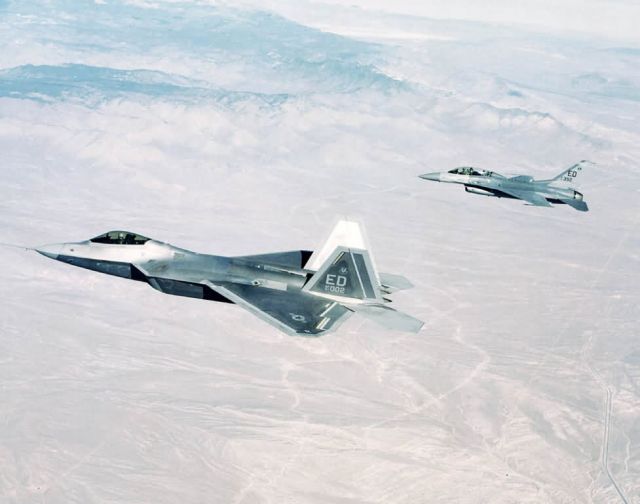 FILE PHOTO—F/A-22 Raptor 4002 flies a test mission alongside an F-16 chase aircraft and reaches the 183 hour flight test milestone. The Raptor is the most advanced fighter aircraft in the world, combining a revolutionary leap in technology and capability with reduced support requirements and maintenance costs. The F/A-22’s combination of stealth, integrated avionics, maneuverability, and supercruise supersonic flight without afterburner will give Raptor pilots a first-look, first-shot, first-kill capability against the aircraft of any potential enemy. The Raptor is designed to provide not only air superiority, but air dominance, winning quickly and decisively with few U.S. and allied casualties. The Raptor also has an inherent air-to-ground capability. (U.S. Air Force photo)