Get Interesting Photos Direct To Your Email
Sign up for our newsletter and receive unique photos for your viewing pleasure!
We hate SPAM and we promise to keep your email address safe.
No thanks, I have already subscribed!
Thank You
Follow Us Follow @allrefer Pinterest
AllRefer.com > Pictures & Images > F-16C - Tiger, tiger 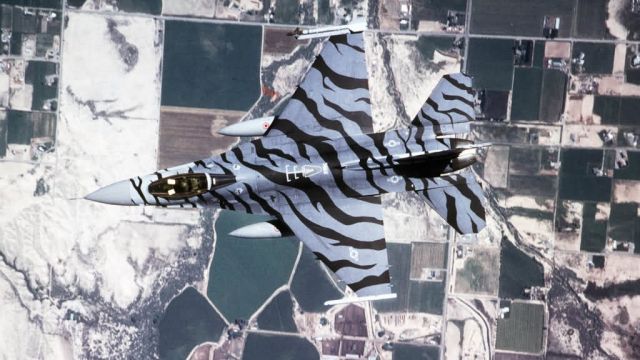 OVER UTAH—A look-down view of a Tiger-striped F-16C belonging to the 140th Fighter Wing, 120th Fighter Squadron, Colorado Air National Guard, as the aircraft flies over eastern Utah while returning from the Utah Test and Training Range. The aircraft has tiger-stripes applied to the upper surfaces and represented the Colorado ANG as their official Tiger jet as the unit hosted the Inaugural Tiger Meet of the Americas in mid-August. The inaugural meet closely mirrors the NATO Tiger Meet and brings together military units that have large cats as their mascots. (U.S. Air Force photo by Staff Sgt. Greg L. Davis)