Get Interesting Photos Direct To Your Email
Sign up for our newsletter and receive unique photos for your viewing pleasure!
We hate SPAM and we promise to keep your email address safe.
No thanks, I have already subscribed!
Thank You
Follow Us Follow @allrefer Pinterest
AllRefer.com > Pictures & Images > F-16 - Wall of Flames 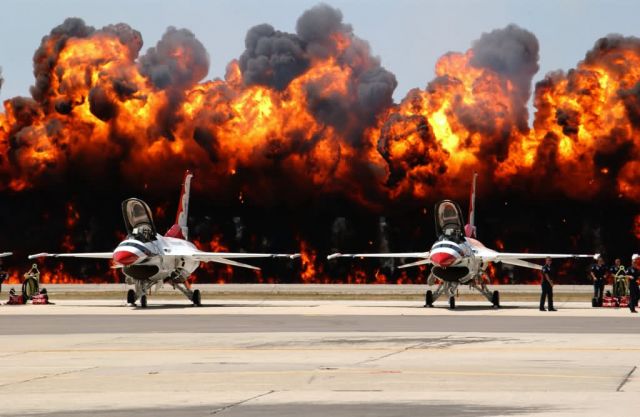 MARCH AIR RESERVE BASE, Calif.—Maintainers perform preflight duties on F-16 Fighting Falcons parked on the ramp while a “wall of flames” erupts behind them during Airfest 2004 here April 24. The fire was part of a heritage flight fire demonstration. The maintainers and F-16s are assigned to the U.S. Air Force Air Demonstration Squadron at Nellis Air Force Base, Nev. (U.S. Air Force photo by Tech. Sgt. Joe Zuccaro)