Get Interesting Photos Direct To Your Email
Sign up for our newsletter and receive unique photos for your viewing pleasure!
We hate SPAM and we promise to keep your email address safe.
No thanks, I have already subscribed!
Thank You
Follow Us Follow @allrefer Pinterest
AllRefer.com > Pictures & Images > F-15E Strike Eagle - Coca-Cola 600 fly over 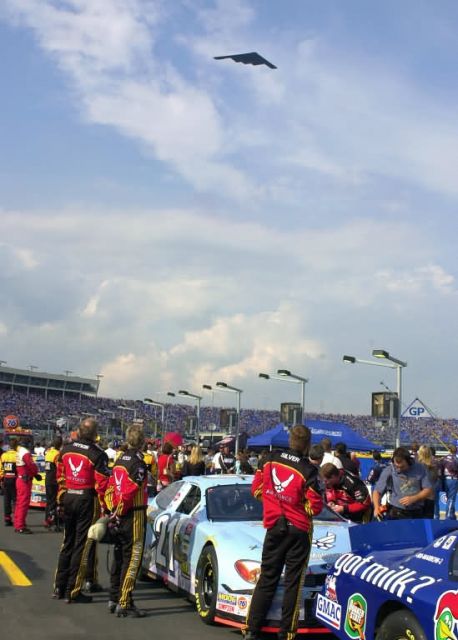 CONCORD, N.C.—Members of the Wood Brothers Race Team watch a B-2 Spirit stealth bomber fly over their Air Force Centennial of Flight race car. The B-2 conducted the flyover during pre-race ceremonies for the NASCAR Coca-Cola 600 at Lowe’s Motor Speedway here May 25. The Air Force car carried a patch from the 333rd Fighter Squadron at Seymour Johnson Air Force Base, N.C., in honor of Maj. William Watkins and Capt. Eric Das, an F-15E Strike Eagle crew killed in action during Operation Iraqi Freedom. Watkins and Das performed the flyover for the 2002 Coca-Cola 600. (U.S. Air Force photo by Larry McTighe)