Get Interesting Photos Direct To Your Email
Sign up for our newsletter and receive unique photos for your viewing pleasure!
We hate SPAM and we promise to keep your email address safe.
No thanks, I have already subscribed!
Thank You
Follow Us Follow @allrefer Pinterest
AllRefer.com > Pictures & Images > F-15 Eagle - U.S. opens Berlin Air Show with "Spirit" 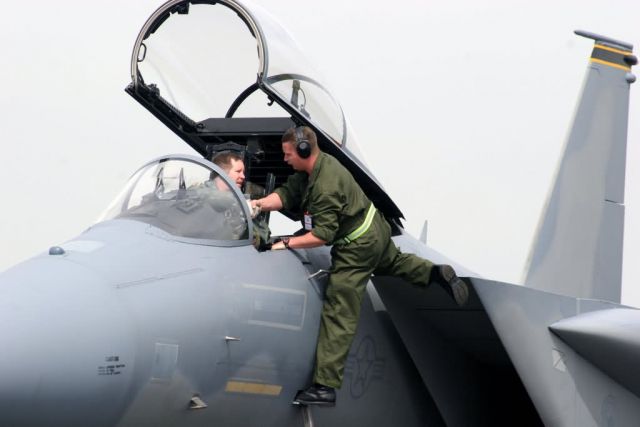 Air Force Lt. Col. Steve Neuser is greeted by a German crew chief shortly after he arrived in his F-15 Eagle at the Berlin Air Show on May 15, 2006. Various models of U.S. military aircraft and about 60 support personnel from bases in Europe and the United States are attending the air show at Berlin-Schoenefeld Airport May 16-21. Colonel Neuser is a pilot with the 493rd Fighter Squadron at Royal Air Force Lakenheath, England. (U.S. Air Force photo/Maj. Pamela A.Q. Cook)