Get Interesting Photos Direct To Your Email
Sign up for our newsletter and receive unique photos for your viewing pleasure!
We hate SPAM and we promise to keep your email address safe.
No thanks, I have already subscribed!
Thank You
Follow Us Follow @allrefer Pinterest
AllRefer.com > Pictures & Images > F-15 Eagle - So long Sword 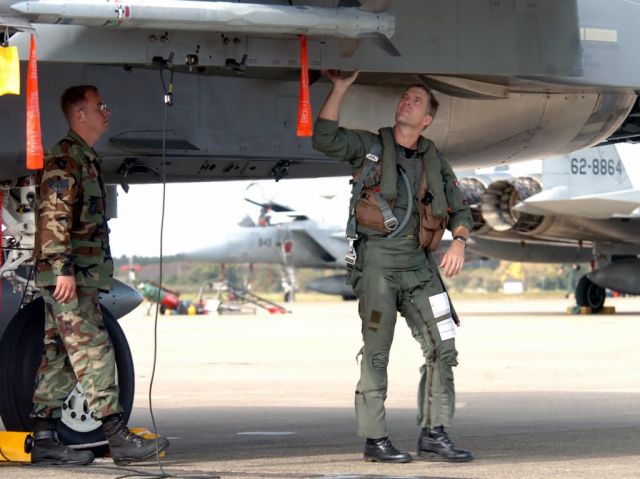 HHYAKURI AIR BASE, Japan—Staff Sgt Kevin Hall (left) and Lt. Col Kevin Robbins conduct a pre-flight check of their aircraft here during exercise Keen Sword 2005. It is the eighth such field training exercise since 1986. The exercise, which ended Nov. 19, is designed to increase the defensive readiness of Japanese and American forces through training in air, ground and sea operations, and to improve interoperability between the countries. Colonel Robbins is an F-15 Eagle pilot from the 67th Fighter Squadron at Kadena Air Base, Japan. Sergeant Hall is a crew chief. (U.S. Air Force photo by Master Sgt. Val Gempis)