Get Interesting Photos Direct To Your Email
Sign up for our newsletter and receive unique photos for your viewing pleasure!
We hate SPAM and we promise to keep your email address safe.
No thanks, I have already subscribed!
Thank You
Follow Us Follow @allrefer Pinterest
AllRefer.com > Pictures & Images > CV-22 Osprey Aircraft - Osprey goes vertical 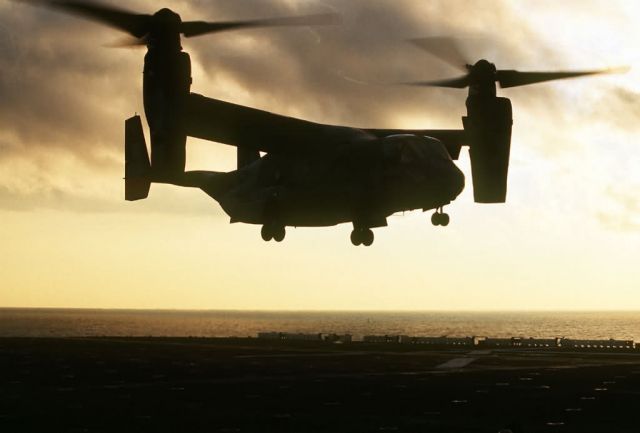 FILE PHOTO—It will be awhile before Air Force Special Operations Command gets its first CV-22 Osprey, but that hasn’t lowered the command’s enthusiasm for the aircraft. The eagerness to get the plane isn’t just because the CV-22 will replace up to 89 aircraft currently in AFSOC’s inventory. Neither is it just because the CV-22 can take off and land like a helicopter and fly like a turboprop airplane. AFSOC—which has headquarters at Hurlburt Field, Fla.—is confident in the belief that the CV-22 will enable the command to do what it can’t do now. That is, conduct long-range, high-speed, vertical lift missions in an aircraft capable of getting troops into and out of an area in one night. Almost futuristic in its design, the CV-22 looks like a helicopter on the ground with two sets of propeller rotors on each wing tip. Once airborne, the rotors tilt forward so the aircraft resembles a dragon fly with turboprops. (U.S. Air Force photo)