Get Interesting Photos Direct To Your Email
Sign up for our newsletter and receive unique photos for your viewing pleasure!
We hate SPAM and we promise to keep your email address safe.
No thanks, I have already subscribed!
Thank You
Follow Us Follow @allrefer Pinterest
AllRefer.com > Pictures & Images > C-141 Starlifter - Medical Transport 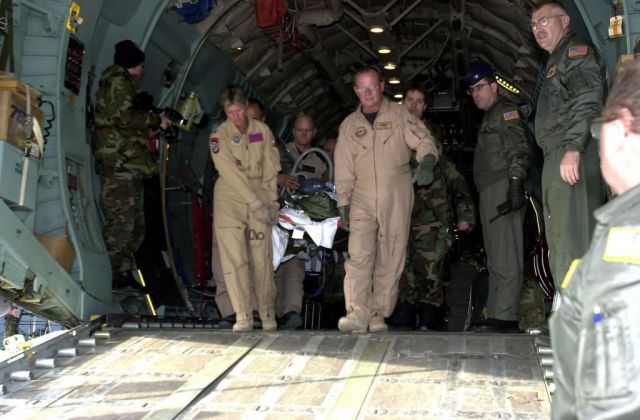 OPERATION ENDURING FREEDOM—Medical people at Ramstein Air Base, Germany, transport one of the 19 servicemembers who were injured during a friendly-fire incident in Afghanistan on Dec. 5, 2001. Fourteen of the soldiers arrived at Ramstein on Dec. 7 aboard a C-141 Starlifter from McGuire Air Force Base, N.J., and were transported to nearby Landstuhl Regional Medical Center for treatment. The soldiers, all members of elite special operations units, were injured Dec. 5 north of Kandahar, when ordnance dropped from a B-52H Stratofortress inadvertently struck near their position. The friendly-fire incident is currently under investigation. (U.S. Air Force photo by Master Sgt. Keith Reed)