Get Interesting Photos Direct To Your Email
Sign up for our newsletter and receive unique photos for your viewing pleasure!
We hate SPAM and we promise to keep your email address safe.
No thanks, I have already subscribed!
Thank You
Follow Us Follow @allrefer Pinterest
AllRefer.com > Pictures & Images > C-130J - Air show 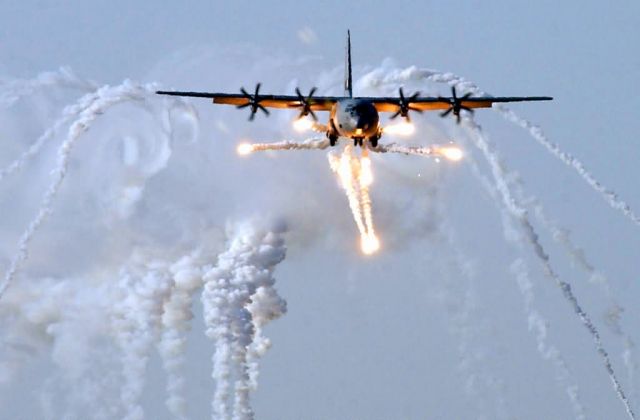 OPERATION IRAQI FREEDOM—A British C-130J launches flare countermeasures prior to being the first coalition aircraft to land on the reopened military runway at Baghdad International Airport, July 1. The runway was bombed by coalition aircraft and has been closed since the beginning of the war. Repaired by the 1st Expeditionary Red Horse Group and the 447th Expeditionary Civil Engineer Squadron it is now operational. (U.S. Air Force photo by Master Sgt. Robert R. Hargreaves Jr.)