Get Interesting Photos Direct To Your Email
Sign up for our newsletter and receive unique photos for your viewing pleasure!
We hate SPAM and we promise to keep your email address safe.
No thanks, I have already subscribed!
Thank You
Follow Us Follow @allrefer Pinterest
AllRefer.com > Pictures & Images > 908th Airlift Wing - Cargo hauler 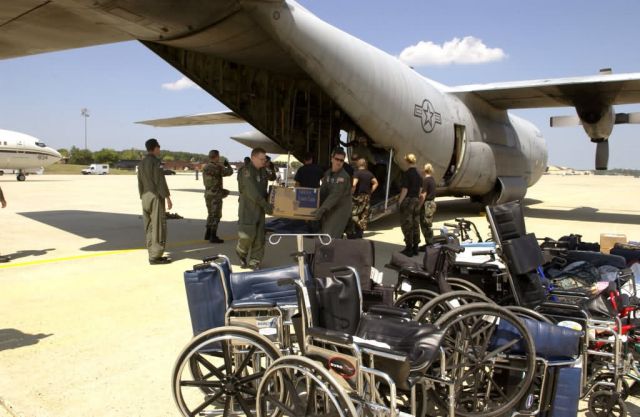 ANDREWS AIR FORCE BASE, Md. - Wheelchairs were among the cargo moved by Airmen with the 908th Airlift Wing at Maxwell Air Force Base, Ala., the 375th Aeromedical Evacuation Squadron at Scott AFB, Ill., and the 89th Medical Group who helped transport veterans from the Armed Forces Home in Gulfport, Miss., after Hurricane Katrina decimated the area. The veterans were flown by a C-130 Hercules from Maxwell to here and then taken to the Armed Forces Home in Washington, D.C. (U.S. Air Force photo by Staff Sgt. Christopher J. Matthews)