Get Interesting Photos Direct To Your Email
Sign up for our newsletter and receive unique photos for your viewing pleasure!
We hate SPAM and we promise to keep your email address safe.
No thanks, I have already subscribed!
Thank You
Follow Us Follow @allrefer Pinterest
AllRefer.com > Pictures & Images > Monitoring Waterfowl 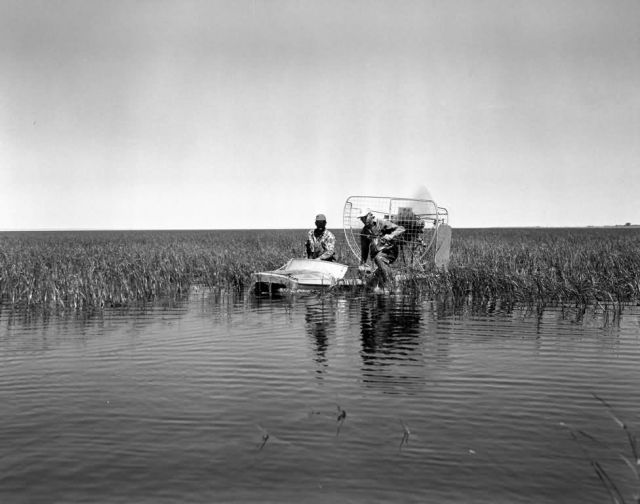 Waterfowl conservation is not just a responsibility of the National Wildlife Refuge System, and what occurs in other countries and regions of the world can affect the productivity and well-being of duck and goose populations in the 50 states. U.S. and Canadian wildlife officials have worked closely for years to monitor waterfowl populations that move in great abundance between the two nations along four major continental flyways. Here, in July 1951, U.S. game management agent William Layman jumps out of a Fish and Wildlife Service air thrust boat on Johnson Lake, Saskatchewan, to move ducks into a banding trap during a waterfowl survey, while agent Floyd Thompson steers the boat. Bird banding is a time-tested technique by which large numbers of birds are tracked in their annual migrations, giving scientists a general picture of the vitality of populations and the productivity of nesting grounds in the Canadian prairie provinces.